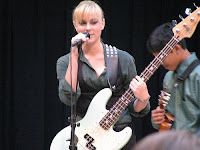 I don't know when it happened, but someone definitely pressed the fast forward button on time. All of a sudden it is only a couple of days before our first Friday Funk on the Lawn, which will take place this upcoming Friday, (April 17th) right after school around 2:50 p.m. I have been practicing, but I am still very nervous. My palms definitely sweat whenever I think about it.

I don't exactly know where my nervous anxiety is coming from, but I think it could be a number of things. It could be from the fact that I might have to emcee again this year. Talking to a crowd and trying to motivate them is definitely not as easy as it looks. Especially for me, because when I get nervous I start talking faster and faster, and then words start coming out before I've even thought of them yet. A can of paint becomes a pan of caint. Great will become grood because I started off saying great and ended up saying good. Almost... Hopefully, this year those things won't happen. I just need to remember to breathe. Breathing is good. :)

I could also be nervous from the lack of a long productive practice this past weekend. During school days we only have about 30 minutes together, tops and that really isn't enough to put some changes in effect, or do anything other than run through songs or perfect sections we already know. Maybe I could talk to the principal and ask to have a day when funk band is excused from classes, so we can prepare for this Friday. I think he would say yes...don't you think? Perhaps not then, but I know that if we can just practice really productively at home, and put forth a lot of positive energy on Friday, we can do it. I know we can, I just hope my mouth does us justice.

That's all for now -
Claire
Posted by ulsfunkmasters at 1:16 PM