For those of you who may not know, a chilla is a musical retreat that musicians in India go on - they play music for 40 straight days and nights. They travel to a secluded place with basic necessities and start playing. Eventually, through lack of sleep and constant focus, they start to see visions as they play and since music and spirituality are very closely tied in Indian culture, those visions are very important.

So, inspired by the Indian chilla, the funk band decided to have a mini-chilla of our own. For 2 days, 12 hours each, we came to school with the intention of only focusing on our musicianship. We had our recording studio set up in the band room and practice spaces set up in Mr. Zorn's classroom. We even had some very interesting reading about listening, practicing and a book on the environment.

We had planned to record 7 songs from our repertoire and 5 or 6 songs for the elementary school's music program. I have to admit I had my doubts that we would get everything done. Last year during our 1 day of recording in 12 hours, we only recorded 3 songs with the whole band and 1 song with a couple of people.

However, I was pleasantly surprised on Sunday night when I realized that even through all our interruption and unexpected complications, we managed to get nearly everything we wanted to record.

I was also proud of my fellow band members. Each one has improved so much and they deserve recognition. Melissa's voice was beautiful and her guitar solo in All Along the Watchtower was amazing. Tem's solos get faster and more intricate by the day and yet they always fit into our songs. Max was able to sing on pitch and with volume and emotion, even though he had a sore throat and congestion. Micah was able to record most of his parts perfectly just one time through and he was able to focus and get most of his parts done in a couple of hours. However, Kule'a was the one who made me the most proud. He has come so far since the beginning of the year and played his parts so well. It was obvious he knew the forms and he even added fills we hadn't heard before. 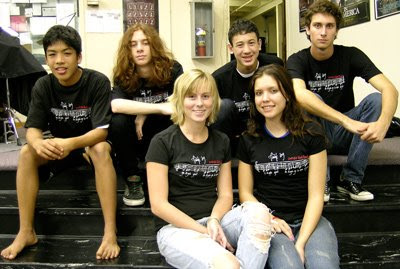 So while we may not have had a perfect chilla, I came home on Sunday night feeling proud and excited to be a part of this year's funk band.

Claire
Posted by ulsfunkmasters at 12:45 PM